As you can see, Mama Mette and her husband Tron live in a densely wooded forest. The forest has large trees with enormous roots. Between those enormous trees there are some smaller trees here and there. 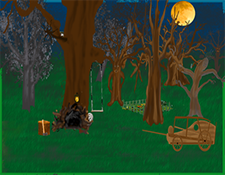 Mommy Mette and daddy Tron have a son Drude together, a scapegrace and a lovely daughter Elv. You write that with a v, so not with an f, as it should be with the Poppels.

Drude and Elv often play around the tree house, which they enjoy together. The family lives by hunting and rooting tubers out of the ground.

Today Drude goes on a hunt with Daddy Tron. After all, he must be able to find his own meals when he is grown up. You need skills for this job and Daddy Tron is going to teach him those intricacies.

Elv is our little princess, she is mainly busy with her diary, in which she writes all her secrets and adventures. She also writes the tricks she secretly plays with her brother.

The day starts like any other, but today a big change will take place in the life of the Poppels family.

It’s around noon when the ground begins to move beneath them. They look at each other incomprehensibly. They had never experienced this before, and Dad thinks they should get away as soon as possible. He calls out to his wife to get the cart ready quickly.

“We have to get out of here, as soon as possible,” he shouts.

They trust Daddy Tron and follow his orders. The cart is put in front of the tree house and they load it with all kind of stuff that is strictly necessary. They don’t have much time, but all four work as fast as they can.

Suddenly the ground starts to shake even more violently, and huge cracks appear that quickly get bigger and bigger and turn into crevices. They know there is no time to waste and they must hurry now to get out.

The tree, which has been their home for years, starts to crack and branch after branch breaks and falls on the ground. One of them is almost falling on Mommy Mette. The shock is now complete, and she hardly dares to move. She shouts in panic, “We have to leave! Now, before it’s too late. “

“But…, but…,” my diary is still inside. I really can’t leave that behind, “sobs Elv.

Papa Tron puts her in the cart and tries to convince her that they really should leave now.

“Honey, we don’t have a choice. We need to get out of here as soon as possible, “and he sets the cart in motion.

Elv doesn’t listen but jumps out of the cart and runs back to the tree.

“Hold on tight,” Mom shouts over the noise and makes sure her children are safely in the cart.

To her horror, she sees the ground around their old house split open and it disappear into one of the crevices. Then she discovers that Elv is not in the cart but on the other side of the split and that she is almost fall into the abyss. In a panic, she doesn’t know what to do and can only hope that her daughter doesn’t fall into the pouring hot lava. She would get burned and then they will never see her again.

Elv understands all too well that it was stupid of her to go and get her diary. She sees the trees falling like straws around her.

Papa Tron puts the cart in a safe place and suddenly they hear Elv crying in a panic for help. Drude too sees the event with fear in his eyes and shouts at her: “Walk over that tree to the other side. Hurry up or it will be too late!”

Elv looks around searchingly and runs towards the tree. In the abyss, she sees the boiling mass passing by and the heat of the fire hurts her face. Suddenly she sees the snow-white mouse running and that gives her wings. She runs over the tree to the other side. The mouse with its red tie follows her example and he too get safely across the other site.

Drude takes her arm and helps her off the tree. They are relieved that Elv is at a safe distance now and not much later they see the tree fall into the abyss. 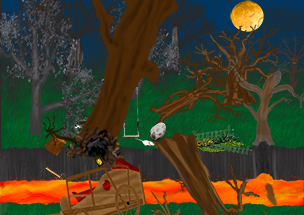 “That was close,” Drude shouts. “Elv always does those stupid things!”

All are looking at the fully loaded cart. Drude is amazed to see that the egg not far from their house has also been charged. Nobody knows how it got there, but they know for sure that the egg did not come from a bird.

Drude climbs into the cart and carefully examines the egg. He scratches behind his ear and taps the egg with his knuckles. “It’s as hard as a rock. Is it an egg?”

The End of part 1