What kind of beast is it?

Elv is sleeping princely, but suddenly she smells an inexplicable strange air, which she cannot identify. She rubs her face and when she sits up, she sees a slimy substance sticking to her hands.

The mucus came from her face and got onto her hands from the rubbing.

“Shit, how does that dirty stuff get on my face?” She wipes her face with her sheet.

“Pop, pop, pop,” she hears next to her bed. Carefully she looks over the edge of her bed, but then suddenly something green jumps onto her bed. She remains as quiet as a mouse and looks at the monster with wide eyes.

Frightening mainly because she has no idea what it is, but it is certainly not a rabbit.

She sees his small sharp teeth and they make her cringe. When the monster wants to get closer, she cringes and shrinks back. She would love to jump out of bed, but the beast is now right in front of her, repeating the same tune over and over. “Pop, pop, pop.”

Suddenly it jumps off her bed and keeps looking afterwards as if it says, “Follow me.”

Elv does not get it. What should that beast represent, she thinks. It is as if a little devil on her shoulder is telling her to follow him. Slowly she gets out of bed and on tiptoe she follows the beast. Why she tiptoes is a mystery to her? Just in time, she grabs her coat before following the little monster outside. In any case, she is happy that the beast has left the treehouse and quickly closes the outside door.

“Well, at least he’s outside. That was easy and relieved she stands with her back against the door.

“That was smart of me,” she whispers with a grin.

After a while, she dares to open the door again. She has not seen the beast for a while and carefully peers inside. He is not there either and cheerfully she walks to her room.

After this adventure, Elv decides to crawl back into bed, but the beast is waiting for her and calls. “Mommy, Mommy.”

Elv does not understand it, how is it possible that the beast is sitting in her room again and she looks at him in confusion.

With his big green eyes, he gives her a friendly look and Elv feels that her fear of the beast disappears.

How is this possible, I put him out off the door, she thinks? Elv looks for a place where he could have slipped in. Behind the large chest, which is next to her bed, she discovers a hole that leads outside. “There is no other way, he must have come back in through that hole,” whispers Elv. 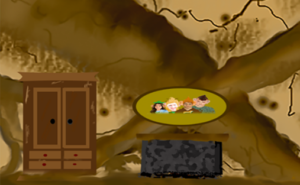 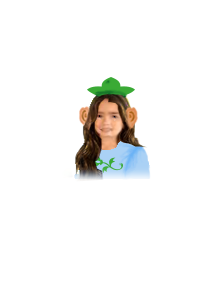 Her room door opens and Drude enters her room. Surprised, he looks at the beast that is sitting on the bed and runs off to get his stick. If he wants to chase the beast away, Elv shouts that he should not do that.

“He won’t hurt you, although I have no idea what it is. He was suddenly on my bed.”

Drude puts down his stick. “I think I already know where it comes from. Just follow me,” he replies and together they walk outside, and the beast also follows them.

Next to the tree, they see an empty eggshell. It does not take any more words to know where the beast comes from.

“It came out of the egg. That was the noise against the tree,” Elv whispers.

Both have doubts about whether it is wise to tell their parents about the beast. Maybe the beast will be chased away or worse, killed.

“Let’s wait a while before we tell them,” says Elv. “Let us see if it’s dangerous first. I do not think so. Do you know that he calls me Mommy?”

“Don’t be silly,” answers Drude. “An animal that calls you Mommy. Soon you will believe in fairy tales.”

But then the beast approaches Elv and shouts, “Mommy, Mommy.”

Elv bends over him and gently tries to coddle him. She finds it creepy, but still dares to do it.

Drude is also caressing the beast. “He has a hard skin. What for a beast will it be? Maybe he will not hurt us yet, but later when it grows up. What then?’

They look at each other in silence and laugh when they notice that the beast is staring at them one by one. They get cold and decide to go back inside. It is quiet in the hall and when Elv notices that the beast is not following her to the bedroom, but that he is going to the living room, they decide to see what it is doing there. “Why are we chasing him and what does he want anyway?”

The animal sits in front of the fireplace and keeps shouting, “Mommy, Mommy.”

“Well, look now. He is shaking all over it. Maybe he is cold?”

‘Maybe. How strange that he sees you as his mommy. We could light up the fire, but I’ve never done that,” suggests Drude.

Drude walks to his room and returns with a blanket and covers the beast. He crawls even deeper under the blanket and softly they hear him snore. Drude and Elv look at each other with satisfaction.