Drude explains to her that he too has walked around the tree and that behind the tree there are rocks where there is also an entrance. “You know Elv, I was also a bit scared.”

Suddenly there is another roar through the hollow tree and together they run outside. They tell their parents that the tree is beautiful, but that there may be some monster inside.

Mamma says that they too heard the roar and that it is probably not a good idea to live in this tree.

Drude explains that the inside is more like a maze. “There are so many rooms you can easily get lost in them,” he says.

Once again, they hear the roar from the tree and Elv and Drude look at each other with fear.

“Oh-oh, it looks like there’s a really big beast inside,” Drude says.

Together they hide behind their parents and look intently at the entrance of the tree.

Daddy lifts his bat and runs inside. Again, they hear a huge roar, but then suddenly it is dead quiet, and it remains silent.

Elv and Drude hold on tight to their mother and look at her questioningly. They keep looking at the entrance with frightened eyes and hear the roar again, but Father does not come out.

“If so, I’ll make him mincemeat,” calls Drude, waving his club around like his father.

Mother Mette takes a few steps to the entrance of the tree. She is very concerned and wonders whether she will see her husband again.

But then Father comes out grinning with the bat over his shoulders.

Drude asks if he killed the beast and Elv jumps up to her father.

He says there is nothing to be afraid of. He hasn’t been able to discover anything that looks like a monster.

The howling is audible again. They do not understand anything about it and look at their father in surprise and ask him where the roaring comes from? Father shrugs and replies that he also does not know and that he has not been able to discover anything strange or monstrous.

Mother has had enough and walks in without deleting another word about it. “Mom what are you going to do. It’s too dangerous there, “Elv shouts.”

“We Poppels don’t afraid of anything. I want to know what’s going on in there, “Mother replies.

If mother dares to go up the tree then we should not be left behind, they say. They all go in looking for whatever is in the tree.

The tree is beautiful, and it seems that indeed they need not be afraid of anything.

Inside the hollow tree they search for the strange phenomenon, but more than just beautiful shelters there is nothing to be afraid of, but then suddenly there is that roar again. Elv is startled and puts her head through one of the holes in the tree. She feels water running over her head and startled, pulls her head back and beckons the others to come over to her. Again, there is a roar, and, on Elv’s instructions, father also pokes his head through the hole. Father looks closely at where the water comes from and discovers where the roaring or actually thunder comes from. It turns out that behind the tree is a huge waterfall and water is regularly forced down which causes the noise.

“Don’t be afraid, we have found a gold mine,” father shouts.

“No dear, Daddy means water is worth as much as gold,” Mom replies, and then she too sticks her head through the hole and gets soaked.

“This is a good start to the day, but we still have a lot of work to do to get things right. Let’s clear the cart first and then see where we put everything. “

First, Drude carefully takes the egg, which is almost the same size as himself, from the cart. Place it under an overhanging rock next to the treehouse. So, here the egg is dry and protected, he thinks.

Elv comes over to look and rubs her chin questioningly with a finger. What could be in the egg, she thinks. “Hey Drude, there is no bird or chicken in this. I think it’s kind of scary such a big egg,” she whispers as if she’s afraid that what’s in the egg can be heard by her.

“No, there is nothing wrong whit it,” Drude replies, looking carefully at the size of the egg. “Although you are right. It’s a big egg. “

They don’t have time to fantasize about the egg because mother tells them to go to work. 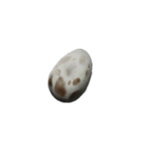 The end of Part 3