For the Poppels family, the night has moved slowly by and now that the morning sun is gently showing its rays again, the Poppels feel their stomachs growling with hunger.

Tired, Drude rubs his aching neck. He has been lying under the open window all night and suspects that the cold has cooled his muscles considerably.

Breakfast is just as sparse as yesterday. They sit at the table and hear each other’s bellies growling with hunger.

That little fruit that is left from yesterday is not enough to satisfy their hunger.  Suddenly there is a knock on the door. Dad takes his bat and runs to the opening. The children remain anxiously behind their mother.

Father carefully looks around the corner, but no one is to be seen outside. Then his gaze falls on a young deer lying dead in front of the tree. Father waves to the others that they can come out safely. They don’t understand. Did the young deer run into the tree or did someone put it down for them? Father walks around the tree but there is nothing to be seen that poses any danger to them.

“At least we have meat on the table for a longer period of time,” whispers Elv.

“Dad, I’ll help you with the stripping,” suggests Drude.

Most of the meat is salted and hung in a cool place deep at the bottom of the tree.

There is not much time to wonder where the deer came from. Father and mother think it is strange and they no longer believe in fairy-tale. Maybe one day they will find out where it came from.

Drude helps his father to put the shutters on the window and his mother tries to plant a vegetable garden. Elv sits outside against the egg and starts writing in her diary. Her pencil seems to slide over the paper by itself. She writes down line after line without much effort. Unexpectedly, the egg begins to move, and she looks scared and doubtful to the egg.

“How is that possible? I’m sure the egg moved, and it was knocking from the inside,” she shouts to Mother.

Mother smiles at her and shakes her head. “Your imagination is running wild. I think it is because you are writing so much in your diary,” she replies.

Elv doesn’t understand. She wonders why mother always grumbles about the fact that she is writing everything down in her diary. I must have imagined it, just like Mother says. Still, she is not sure and sits back against the egg hoping it will happen again, but it remains silent. When she has processed everything in her diary, she is going to helps her mother with the garden.

“Honey, we can’t plant much now. Soon it will be winter, so we just must plant kale and Brussels sprouts. Did the egg do anything else, “Mother asks, laughing?

Elv wisely decides not to answer this question and goes inside where the others are busy, but they have no time for her. Bored, she goes outside again and sits down on a tree stump. She looks around curiously but cannot put the egg out of her mind. ‘She had clearly felt and heard it,’ she whispers.

The four of them had done their absolute best in recent days. All windows have shutters now and they had even built a kitchen. Together, Father and Drude had placed the front door and they had installed a beautiful fireplace. That fireplace could warm them pleasingly.

Elv sits on a chair and stares at the flames in the fireplace. Suddenly she sees an image appear in the flames. The others are busy with their own activities and carefully she asks them if they see what she sees.

“Yes, of course, Elv keeps on dreaming,” replies Drude. “Are you okay?”

She no longer hears him and yet she clearly sees the image becoming more and more visible. She sees Poppels dancing in a fairytale atmosphere and traditional costumes in a beautiful space. It reminds her of the pictures from her mother’s photo album. The women wear silk dresses in beautiful pastel colours and her eyes shine. The handsome men in their stately costumes make her feel warm inside. She moves closer to the fireplace and reaches out her hand towards the flames, but then something happens, that she never thought was possible. She’s abruptly drawn into the flames. She is still screaming for help, but suddenly she is standing in the middle of the enormous, beautiful room. The paintings on the ceiling dance in the light of the torches which are hanging on the wall.

Slowly a young man approaches her and asks her to dance. She wants to tell him she can’t dance, but she follows him and dances gracefully around the room. Her dance partner smiles at her and together they take possession of the dance floor. The rest of the attendees look after them admiringly.

Suddenly she returns to reality and sees the image fading in the fire.

When she regains consciousness of her senses, it becomes clear to her that Drude has pulled her away from the fire.

“Are you out of your mind? You know you shouldn’t be too close to the fire,” he shouts!

Her hands, which she has clenched in a fist, hurt from the heat, but fortunately, they are not burned. She thanks her brother and asks him not to tell their parents. ‘I owe you. Can you promise me that? “

Drude nods and whispers, “Watch out from now on. You scared me. I’ll be silent about it, I promise. “

“What are you going to keep quiet about,” Mother asks? “

Brother and sister shrug and say she misunderstood.

When Elv opens her fists, she sees a button in one of her hands. A button from the handsome man’s suit. 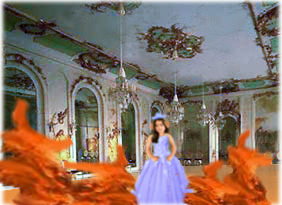 The End of Part 5