From her bedroom window has Elv a beautiful view over an enchanting environment. The sun, which slowly disappears behind the trees, gives the surroundings a fairy-tale atmosphere, and the colours it spreads are beautiful. Elf looks at it admiringly and listens to the sounds that are not yet recognizable for her. In her hand, she has the knot from her adventure by the fireplace and wonders where she can hide it. She decides to hide it under her pillow. Carefully, as if it were made of pure gold, she places it underneath. She takes out her diary and starts writing.

Drude enters her room and sits on the bed next to her. Elv closes her diary. No one, especially no one, is allowed to read what she writes in her diary. Those are her feelings which she writes in it and they are only for her.

“Are you writing about me? Hopefully, no mean things?” Drude asks.

“Yes of course. I am going to bed. Don’t forget to close the shutters, otherwise, there is a chance that ghosts will come in and maybe they steal your diary,” laughs Drude and kisses her. Elv looks after him and despite not taking his advice seriously, she still closes the shutters. 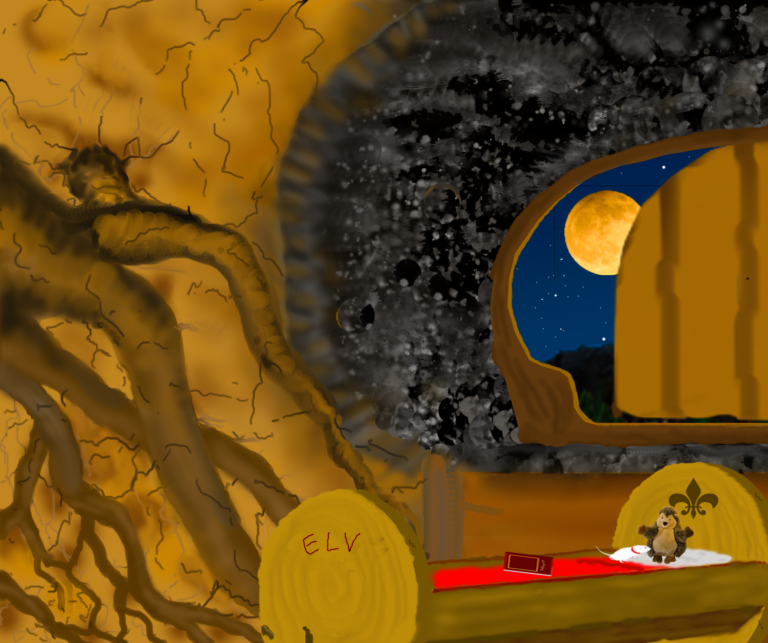 Mother comes and wishes her a good night. Tired and satisfied, Elf crawls under the covers and thinks about what she lately has been through. Again, she listens to the sounds from outside. Now and then the strange environment scares her and then she fantasizes about her old familiar house. She knows that there is no going back and the four of them must make the best of it. Outside the wind is blowing against the closed shutters and produced a whistling sound.

Elv crawls deeper under the covers. She does not like the wind; it always makes her restless.  Fortunately, she soon falls asleep.

Suddenly she is awakened by a strange noise. She thinks that something is hitting the tree. Tok…., Tok…., Tok, it sounds again. But then the noise suddenly disappeared, and it becomes dead silent.

Drude has also heard the sound and sneaks out with his homemade stick. The moon is standing high in the sky and the wind is still strong. He tiptoes around the tree, but he sees nothing to worry about. Right next to him he hears the knocking again. He looks at the egg in front of him, picks it up, and puts it against the tree. He carefully puts his ear on it, but he does not hear anything.

“What would be in it. It must be some weird bird,” he whispers.

Father also comes outside and asks what is wrong?

“I think there is something in that egg, I’m sure of it. But what?’

Father rubs his face and shrugs. “I wouldn’t know, son. Let us go back to sleep. I’m going to check on your sister, I think she will be sleeping nicely.”

Elv opens her eyes when Father enters the room

“Did the knocking scare you,’ father asks?

“A little bit,” she replies, and then her mother also enters the room and tells her it probably came from the egg.

‘I told you so. I am so curious about what will come out of the egg. Maybe it is a dragon?” answers Elv.

They all must laugh about that, but because they do not want to spoil her fun, they leave it for what it is, and everyone goes back to their bed. Tomorrow will be another busy day and soon they fall into a deep sleep.

In the meanwhile, the wind had disappeared and something strange is happening outside.

The egg starts to move and there are small hairline cracks that appear on the shell of the egg.

The cracks are getting bigger till the egg are breaking slowly and then it is quiet again.

Elv is waking up. Again, she hears a strange noise, and she goes to the window and checks if the wind has done much damage around the tree. Because the moon is behind the trees and the light does not hit the ground, she cannot see what is on the ground. Something had awakened her, but it was not the knocking. No, it was rather a thumping against the tree that made the branches tremble. So much, that it made her nose itching. She pauses for a moment, but thinks she probably dreamed it, closes the shutters, and snuggles again, and falls asleep.

If she knew what was going on outside, she would not have fallen into a wonderful sleep. An enormous shape appears which bends over the egg. It opens its mouth and puts its teeth in it.

The end of part 6